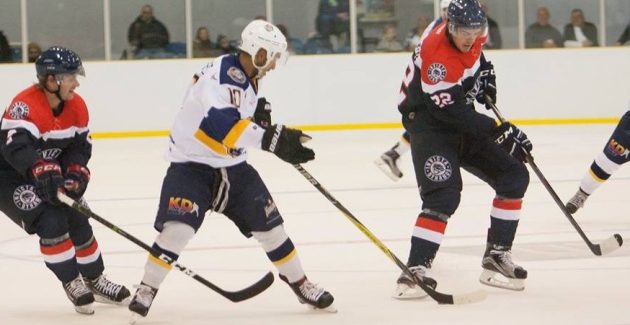 Raiders are finally delighted to announce the return of Mason Webster after a two season break at Invicta Dynamos where he was Players and Supporters Player of the Year last season.

Mason played his junior hockey in Chelmsford, making five appearances for the Warriors at the age of 17. He then moved to Haringey where he made 33 appearances, averaging almost a point a game in scoring 11 goals and 20 assists. In the middle of 2014/15 season he moved to Peterborough Phantoms where he iced 25 times scoring five assists but ended the season with a Play Off winners medal.

Mason joined London Raiders in the summer ahead of the 2015/16 season, where he made 44 appearances scoring 10 goals and 30 assists for 40 points, the second best points haul by a British player whilst being the most penalised player in the league that season with 166 minutes.

Mason then moved onto Invicta Dynamos where in two seasons Mason made 70 appearances, scoring 20 goals and 43 assists for 63 points. In his first season he picked up an NIHL Play Off winners medal and in his second was a double player of the year.

Mason is no doubt looking forward to getting the Raiders faithful “off his back”, as he explained :-

“I am looking forward to hooking up again with the Gold & Blue after a couple of seasons away. After playing all my junior years at Chelmsford under Easton I always kept an eye on what his teams were doing and once he moved to the Raiders and started putting together the squad that he has, there was only one place for me to be.

“I always had a good relationship with the supporters in my first season here which turned a bit once I started playing against them but I’m back now and I’ll do everything I can to get these guys back on side and get the Raiders back to the top of league where they belong. Hopefully everyone will see me as a better all-round player with more experience in this league now.

“I’m looking forward to testing myself in a new line up against stronger opposition as the league has improved again. The facilities at the new rink are second to none and this will be the first full season there, it’s been a long time coming and I for one am looking forward to creating a little bit of history as we open up our new campaign in September”

Sean Easton explains what he sees Mason bringing this season

“Mase is a competitor: He loves to win and will compete tooth and nail to achieve good things. My recruitment this year was focused on size strength and skill. We needed bigger bodies to compete with the bigger players within the league.

“What I like about Mason’s game is his grit and willingness to go into the dirty areas (net and corners). We need a grinder that will give and take a whack to win puck battles. Mase is that guy as well as being able to have flare in his game. He put up impressive point last season and we hope to see him better that this year.”

“Each one of our new faces to the Raiders brings exciting skill, experience, leadership and grit. This is what we needed to take the next step to be competing at the top. With our imports to still be announced Raiders will once again strive to be a force in the top British flight of hockey”