As reported by Time 107.5 on their Thursday Sports show, and the Romford Recorder, the Raiders are delighted to welcome back 26 year old Blahoslav Novak to Romford, for a second season in Gold and Blue.

“Blaho” moved from his birth country Slovakia as a 14 year old and spent many years in the Chelmsford junior system before playing for several senior teams at home and abroad.

Last season Blaho made 42 appearances for the Raiders, scoring 17 goals with 22 assists for a total of 39 points, whi8ch meant he was fourth highest Raiders points scorer last season. He was also the most penalised player in the league last season with his “all action” style not suiting the officials.

After playing in the junior system at the Riverside, Blaho made his Chieftains debut in 2009, where he scored 21 goals and 35 assists for 56 points in 35 games. He then moved back to Slovakia and played the next three seasons in the Slovak Under 20 league playing for HC Trnava before two seasons for Slovan Bratislava. He made a total of 156 league and play off appearances in Slovakia scoring 51 goals and 65 assists for 116 points.

He returned to the UK in 2014 to join Telford Tigers in the EPL, in two seasons making 106 appearances scoring 33 goals and 34 assists for 67 points, winning EPL League and Cup in his second season. In 2016 Blaho played in Norway for Moss scoring 3 goals and 6 assists for 9 points in a team that suffered relegation. The following season, Blaho was back in Slovakia playing in Division 2 for HC Topolcany , scoring 12 goals and 11 assists for 23 points in 51 appearances for a team that finished in fourth place in the league and lost in the play off semi finals.

Blaho is clearly keen to be returning to the ice as he explained:-

“I’m grateful to be back in Raiders shirt for next season. It was an honour to be part of this club, run by amazing group of people. Our fans are incredibly loyal and loud, travelling with us to even the furthest away games and it’s going to be much more travelling next year, to see the best teams in English hockey compete in one league.

For me personally, last season obviously didn’t finish the way i wanted, but that gives me even more motivation for next season. I have a lot to give back and I’m really looking forward to give my best this upcoming season.

The new season is going to bring new challenges, but I’m sure the hard work by Sean, John and the rest of the team in the off season will pay off, and the new players coming in will bring more strength to our club.

Is it just me or is anyone else counting down the days till it all starts?” 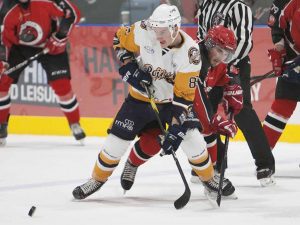 Sean Easton is pleased to see the return of a player he has worked with going back 11 years
“Blaho is a valuable centre man. Good on the draw and has great offensive skills. He plays the game on the edge which is great to watch even though we unfortunately lost him for the latter part of last season. With Blaho’s significant experience, he will be called upon a lot this season to get us through tough games”.
So it is a big welcome back to Blaho, but we do need to see more of him on the ice this season!

It is also a very welcome return to the Raiders for the surprisingly well travelled 20 year old Ross Connolly, younger brother of recent Raider John.

Defenseman Ross previously iced for Gold & Blue at Lee Valley in the 2016/17 season making 17 appearances, scoring one goal and eight assists for nine points showing a keen eye for joining the play to support the forwards.

Ross joins the Raiders from Whitley Warriors for whom he made 30 NIHL North 1 appearances last season scoring two goals and 12 assists for 14 points. His other senior appearances in the UK came with 25 appearances for Solway Sharks when he scored one goal and four assists for five points; and nine appearances for Invicta Dynamos in 2017/18.

Ross moved to Greater Metro Hockey League in Canada making a couple of appearances for Tottenham Steam before moving to Temiscaming Titans who are based in Quebec. Ross made a total of 31 appearances for the titans scoring 13 assists. Following his spell with London Raiders, Ross went to play in Western State Hockey League (WSHL) for Casper Coyotes where he made 19 appearances scoring five assists before returning to UK.
Ross is pleased to be adding the Raiders back onto his CV as he explained:-

“Yeah I’m excited to back playing for a great bunch of fans. I decided to come back to play in Romford because Sean had nothing but great things to say about the organisation now and I enjoyed my time when I was there last. I am wanting to compete for silverware in the new league which I think we can do. This seasons new challenge will be a good one getting to play against quality opposition week in week out. See you all in September!” 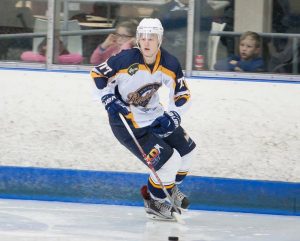 Coach Sean Easton was pleased to add some British quality to the blue line as he commented
“Ross returns to the Raiders after 2 seasons away. Ross brings offensive upside to his game as well as being a smooth skating d man. Ross impressed many coaches up North when he iced for Whitley Warriors, and I’ve had nothing but good reviews from coaches I have spoken to.

Welcome back to the Raiders Ross.