Everyone Active Raiders returns for Webster and Barry

As announce by Time 107.5 and the Romford Recorder last evening, the Raiders continue the building of the squad to take to the new National League and for now the new faces will have to wait for another week as we confirm the welcome return of Sean Barry and Mason Webster.

It will be defenseman Barry’s third season for the Raiders having first won over the G&B fans in the 2017-2018 campaign when the 4 ex EPL teams dropped into NIHLS1. Last season Sean missed just two league games in making 46 appearances, scoring three goals and 15 assists for 18 points. In total Sean has now made 90 appearances for the Raiders (ranked 82nd in all time appearances), scoring 6 goals and 29 assists for 35 points (ranked 124th in all time scorers).

Sean progressed to the Raiders through the Chelmsford junior system before making his senior debut for the Warriors at the age of 16, for whom he went on to make 46 appearances in total picking up 17 assists.
He made his Chieftains debut at the age of 18 in 2012/13 and had been a permanent fixture on the Chelmsford defence thereafter including being ever present in two consecutive seasons. During that time Sean picked up 4 consecutive NIHLS1 league winners medals as well as play-off and cup competition medals. In total Sean made 160 Chieftain appearances scoring 4 goals and picking up 50 assists for 54 points before his move to the Raiders.

Sean’s ability to join the advancing plays with his now familiar rushing style has led to a number of important goals with some equally impressive celebrations when he does score and Raiders fans and management will be looking forward to more of the same in 2019-2020. 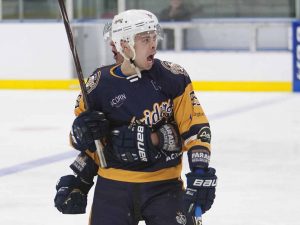 Sean gave credit to the fans and the teams desire to perform in the highest league possible as he commented:
“I am very excited to be back in the Gold and Blue and playing in front of the best fans. When Easton told me about the new league set up, I knew where I wanted to stay: At the Raiders as I think we can surprise a few teams again this upcoming season. I’m hoping as a team we can just be more consistent as that’s what we lacked last season. But I’m sure everyone will be on the same page come September and we will be wanting to win some silverware”.

There are few more familiar than coach Sean Easton when contemplating what Barry brings.
“Sean brings a lot of energy to the team both on the ice and in the locker room. His vocal leadership encourages and inspires the team. Sean reads the game very well and what he may lack in physical size he certainly compensates in “hockey smarts”. Sean makes those smart plays and the right time because of this ability to read the game and he understands the tough moments in games and adapts”
Welcome back Sean (Barry)

It’s also a deserved welcome back for the Raiders to Mason Webster, who will be playing his third season in the Gold and Blue.

Mason’s last season was decimated after breaking his leg in the opening home league game of the season against Streatham in a freak tumble with Leigh Jamieson. He showed great resolve to recover from what was a complicated break and great mental resilience with a confidence building return after Christmas to make a total of 23 appearances in the season, scoring six goals with assists on 12 for a total of 18 points. It was clear however that Mason wasn’t quite back to his best.

To date, Mason has made 67 appearances for the Raiders, scoring 16 goals and 42 assists for a total of 58 points (ranked 87th in Raiders all time scoring). Mason played his junior hockey in Chelmsford, making five appearances for the Warriors at the age of 17. He then moved to Haringey where he made 33 appearances, averaging almost a point a game in scoring 11 goals and 20 assists. In the middle of 2014-2015 season he moved up a league to Peterborough Phantoms where he iced 25 times scoring five assists and ended the season with a Play Off winners medal.

Mason re-joined the Raiders in the summer ahead of the 2015-2016 season, where he made 44 appearances scoring 10 goals and 30 assists for 40 points; the second best points haul by a British player whilst also being the most penalised player in the league that season with 166 minutes.
Mason then moved onto Invicta Dynamos where in two seasons Mason made 70 appearances, scoring 20 goals and 43 assists for 63 points. In his first season he picked up an NIHL Play Off winners medal and in his second was a double player of the year. 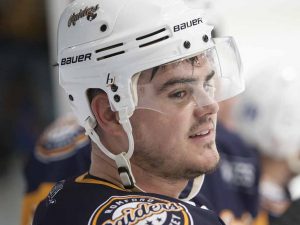 Mason is keen to get back in action
“I’m happy to be signing back at Romford for another year. I’m very familiar with the club, love the boys and I enjoy playing for the fans. Last year was probably the toughest one I’ve had due to my injury and I really struggled to pick up from where I left off. With the long break we’re having I’ll be back to full fitness and will have the right mind set to start the season come September”

Coach Sean Easton ran through the reasoning behind Mason’s return and again highlights what we missed with Mason’s absence last term.
“Masons 18-19 was an unfortunate season with breaking his leg in the first weekend. We didn’t get to see the player we are familiar with and it will be exciting to see the real Mason back in action this season. We all know the physical presence he can provide and the points that he puts up from the tough nitty gritty areas of the ice that some players wouldn’t be so comfortable in”

There will no doubt be a lot of work and preparation during the summer to see the Mason we have enjoyed watching in the past and on the new stage of the national league it will be interesting to see how Mason and the rest of the team adapt to what will be some different challenges.