Double JC As Connolly Signs Up 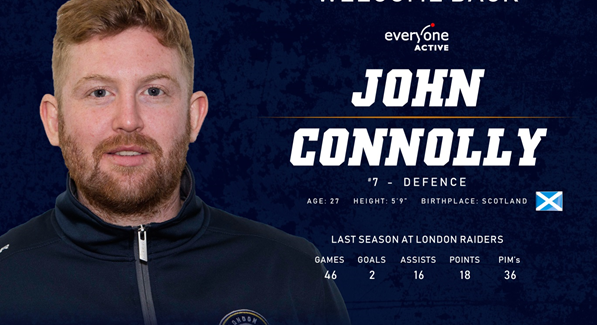 Highly experienced Paisley born D-man John Connolly returns for his fourth season in the familiar #7 in gold and blue, having previously benefitted from time in both the Elite and EPL Leagues.

Since joining the Raiders 27 year old John has made 99 appearances, scoring 6 goals and 35 assists for 41 point and has been credited with wearing the A for the last 2 seasons giving him one of the better seats in the team photo.

Last season John’s Iron Man statistics included appearing in all 46 games scoring 2 goals and 16 assists for 18 points, no doubt delighting Jack Cooper who, despite the humorous stick he receives regarding his points scoring, actually scored more.

John’s junior career included two seasons in Western States Hockey league with Texas and New Mexico Renegades, but he was still selected for the Great Britain U/18 squad for two seasons for World Championships winning Gold and Silver Medals picking up a Best Defenceman Award. He progressed to be selected twice for the Great Britain Under 20 World Championship squad picking up Silver and Bronze medals which he may have to give back to the owners when they find out who took them.

John started his senior career home in Scotland making 54 appearances for Braehead and Edinburgh; before moving on to EPL where he has iced for Slough Jets, Manchester Phoenix and Milton Keynes Lightning, making a total of 61 league, cup and play-off appearances.

He gained further foreign experience with a brief spell in 2011/12 making 8 appearances for MHS Kazakhmys in Russia MHL League, before returning to play for Solway in NIHL North, for whom he picked up a league winner’s trophy having made 35 league / cup appearances, scoring 12 goals and 34 assists for 46 points.John then moved to Chelmsford where he made 98 appearances in all competitions, scoring 10 goals and 64 assists for 74 points, picking up league and play off winner’s medals.

Speaking on the forthcoming season John is clearly optimistic on what the outcomes will be from introducing some new blood into a strong Raiders line up.

“Yeah I’m looking forward to having some new team mates join the lads this season and it will be good to see a few of the new faces coming in. I haven’t trained with any of the new boys but I have played with some of them in the past. The rest of the league seem to be holding back with their announcements so it’s difficult to see whether we have any outright favourites yet for the coming campaign.

Sean Easton praised the returning d-man, who he also coached at their previous club in Chelmsford.

“JC is the backbone of the changing room, he knows when he needs to put a smile on a face or a rocket up them. Again another quick thinker in tough situations, a dependable player for the raiders and an experienced head.