Announcing the team shirts for the National League

Everyone Active Raiders are delighted to reveal the new shirt designs for the forthcoming 2019 2020 season in the brand new National League of the NIHL.

For regulars Raiders’ fans it will come as no surprise that Paul Windebank our designer has again crafted some very attractive shirts as you can see below. Bear in mind as the team sponsors list grows and grows that these are shown in their base form before logos are attached.

We have a few pleasant surprises here so pay attention!

The player “own and loan” shirts this season are to be of a far superior embroidered / stitched detailing design. So where in all previous Raiders seasons shirts have been custom printed (dye sublimated) these shirts will be a combination of dye sublimation for the background colours and designs but the Raiders logo, player name and numbers and some other detailing will be embroidered in place giving a far more robust, quality feel. In addition the player’s signature will be permanently printed on the shirt. 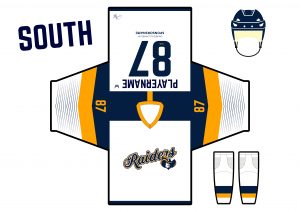 Replica shirts this season will be exactly that. A printed only version without the players’ signature and no embroidery.

The second surprise has been discussed in previous seasons but this year we will be swapping between light and dark shirts on the weekend of 21/22 December which will be roughly the mid-point of the season. So prior to this date the home shirts will be the predominantly light design and from the mid-way point the darker shirts will become the home shirt. This gives the fans a chance to see both shirts and lets the dark shirt sponsor see their shirt at the Sapphire. 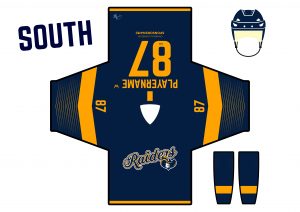 The third surprise is a third shirt. With the league being split into two conferences we will be having a “Northern Conference” shirt. So the scheduled 10 home games and 10 away games against northern conference opponents will all be played in our “Northern Conference” shirt. This means that including any pre-season challenge games the Dark and Light shirts will be worn for the 17 home and 17 away games and potentially cup and play-off rounds giving a reasonably equal exposure to all shirts. 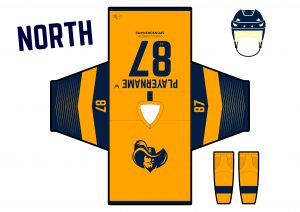 However what cannot be denied is that the quality has increased dramatically and your “own and loan” shirt will be a truly unique item, not available for a fraction of the price on the merchandise stands.

Costs for all own and loan match shirts this season will be £250 each. As with previous seasons your sponsorship will be listed in the match night magazine and on the Raiders web site. We will of course continue with the sponsor announcements on each match night and will be increasing the exposure of your valued sponsorship on our facebook and twitter platforms. We will be offering dates during this season for on ice photos with your player in the shirt and those who wish to repeat this at the hand over at the awards evening are very welcome to request that at the time.

Support for items such as “own and loan” and merchandise is what helped this club survive and we are sure it will be part of the growth into a force in the National League. We understand that many have already reserved shirts and as usual Mel will be doing her magnificent job coordinating and juggling the demands and availabilities. For those that have not dealt with Mel before, she can be emailed on m.treagust@googlemail.com

We have already announced 12 returnees and Mel will be taking bookings for all of these now. But of course there is more. So be sure to be quick off the mark over the next few Thursdays as even more chances appear to get one of these slices of Raiders history.

Coming Soon!
So as a final taster for the season’s shirts to come, we have the small matter of our charity warm up shirt.
A new, local charity. A new and very apt and very attractive warm up shirt design.
We are really genuinely looking forwards to working with these guys and gals who are already so very effective and active in Havering and have some great events of their own for us to take part in and help publicise their great work.

The proposed league start and stop dates and Coventry weekend.