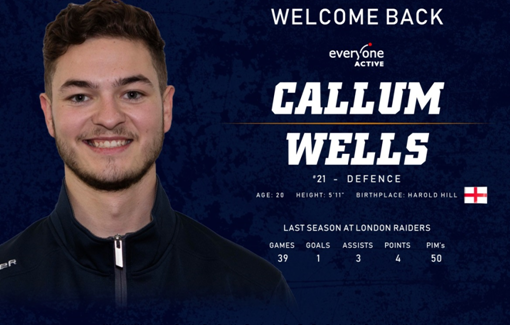 Callum Wells is another very welcome re-signing on the Raiders “D” for the forthcoming season. The 20 year year old 5’11” defence-man is a Havering based ex Romford Junior keeping the local feeling alive.

His first senior season for the Raiders saw him make 39 appearances in all competitions scoring one goal in the opening home league defeat at Lee Valley against Swindon Wildcats and during the course of the season he assisted on three other Raiders goals.

He also showed his willingness to drop the gloves in support of his team mates but with remarkable control for one so capable of the games physical element.

Romford’s closure saw Callum moved into the Chelmsford junior system making 47 appearances for Tomahawks and Mohawks before progressing via the NIHL2 Warriors ( 24 appearances) and into the Chieftains squad. During his junior career, Callum played for GB Under 18 winning a world championship bronze medal in 2016. At senior level, Callum has won a clutch of medals for the Chelmsford Chieftains whilst making 52 appearances scoring 2 goals and 5 assists for 7 points.

Callum is pleased to be back and also has some optimism for the coming season.

“I am extremely happy to be back playing for the Raiders for another season, I think we done really well last season and surprised a lot of people. This season I think we are going to do the same thing and hopefully get some silverware”

Sean Easton is very familiar with what Callum has to offer having coached him since he moved the Chelmsford in 2013.

“Still at a young age of 20, Callum is as tough as nails and hits like a freight train mid ice. Still learning his trade but we are definitely looking for Callum to have a big break out year. He possesses size, smooth skating and a heavy shot all of which he puts to good use game after game.”