Following on from the announcement of returnees Aaron Connolly, Dan Scott, Jake Sylvester and Ollie Baldock the Raiders organisation are delighted to be returning to the weekly schedule of player announcements.
As revealed by Time 107.5 and the Romford Recorder, this week sees the announced returns of two players that grew up in the Romford Junior System and we are delighted that they are back as we can confirm the re-signing of JJ Pitchley and the return of Oleg(s) Lascenko.

JJ’s very welcome return to the Raiders marks his sixth senior season in the Gold and Blue.
JJ made his debut aged 17 away to Milton Keynes Thunder September 2011 with his first goal came a week later in a win over Slough ENL Jets and since then he has gone on to make a total of 194 appearances for the Raiders (including 147 league appearances) ranking 26th in all time appearances. He has scored 74 goals and 61 assists for a total of 135 points (including 48 goals and 46 assists for 94 league points) for an all time ranking of 35th in all scoring.

Following his junior career at Rom Valley Way, JJ had a season playing for Dallas Snipers in USA, before returning to the UK. In the next three seasons he made 55 appearances in EPL for Slough Jets, Bracknell Bees and Basingstoke Bison, in addition to spells with the Slough ENL Jets and Bracknell Hornets in NIHL, in which he scored 33 goals and 80 points in 61 appearances.
Last season JJ played in 47 of the 48 games, missing just the game at Invicta in December. JJ scored 17 goals and 8 assists for 25 points (including 11+6 for 17 league points)

JJ’s passion for his home club is never in doubt as he enthused during his return discussions.
“I am more than happy to be back on board with the Raiders! It’s my hometown and my childhood team so always puts a smile on my face! With the guys we have announced already as our core it’s good to see them all back as they play a major part in the Raiders game! From myself I want to have a better year on the offensive side and continue to score goals and make them happen! Summer is well and truly underway. On the ice every other Tuesday working on things and in the gym everyday getting myself in shape ready for the challenge come September!”
On the prospect of playing in the new National League he was equally enthusiastic.

“Being in the new National League is a great step for the club and shows all the groundwork over the last few season is paying off! It’s where the Raiders deserve and need to be. Our end goal of getting to Coventry and winning some silverware hasn’t changed and everyone who’s coming in this season knows this!

“From a fans perspective it’s a new page and chapter for the Raiders and there are massive things happening for this club in the future! Starting September! Let’s keep the atmosphere we had from last season and let’s keep the Sapphire loud and intimidating”

Coach Sean Easton was clearly pleased to see the return of JJ as he summarised the attributes that JJ brings to the Raiders.
“JJ is a great power forward that can carry the puck well and drives through to the net causing problems for the opposition defence every time. He has a great shot release and strength and combined with his Gold and Blue core he will do whatever it takes to make Raiders as successful as possible. I know he has been working hard already and will continue to all summer in the gym to make sure he is the best he can be come September”. 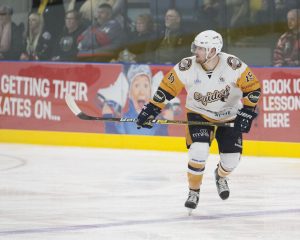 Raiders are also keen to welcome back Olegs Lascenko after a year away from the Raiders whilst playing for his birth town team Liepaja, Latvia for whom he made 23 appearances last season scoring one goal and one assist as a Dman.

Olegs played the 2017/18 season for the Raiders scoring 15 goals and 28 assists for 43 points in 44 appearances, but most memorable of those goals will probably be the one on 3rd February 2018 in the tense game against Cardiff which was the first scored by a Raiders player in the Sapphire. Olegs played junior hockey at Rom Valley Way for four seasons initially as a D man, culminating with 71 goals and 56 assists for 127 points for the Buccaneers Under 18 and Hornets Under 16 teams in season 2012/13. After a season in the Chelmsford junior system, Olegs returned to Latvia progressing through the Liepaja Under 18, second and first teams in two seasons, winning a league winners medal in 2014/15.

He returned to the UK in January 16 to play for Sean Easton’s Chelmsford Chieftains scoring 12 + 5 for 17 points in 22 appearances. He started the following season at Chelmsford before stepping up to the EPL with Bracknell Bees making 45 appearances and scoring 8+10 for 18 points before returning to Raiders.

Olegs was very much focussed on the stands as he discussed his return to one of his junior clubs as he explained.
“Fans are a very big part of any team. If something goes wrong, their support is what gives us strength and energy to push a little harder and give it all 100%. And especially Raiders supporters. The atmosphere is amazing at all games that I have played for the Raiders and I am looking forward to seeing you all in the new season.
“The new league will be great, with many more games, a lot of new teams we haven’t played yet and players that we don’t know, it will be a challenging but great season”.

Sean Easton was again keen to point out the reasoning behind pursuing Olegs whilst he was still playing overseas.
“Oleg returns to the Raiders but this time as a defender. Throughout Oleg’s junior career he was by far the stand out offensive D man in the top junior leagues. Oleg has a great skill set on him, great skater, stick handling and able to turn defence into offence. We are focussing this year on making sure we can turn defence into offence and with Oleg we have just that”. 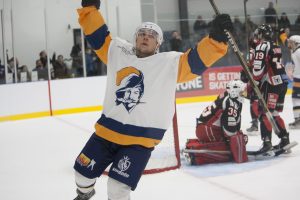