Raiders Thursday announcement gets the squad closer to completion as we welcome back another favourite and greet a new name as we introduce the 15th and 16th players.

Callum Wells is another very welcome returnee on the Raiders “D” for the forthcoming season.

Callum moved into the Chelmsford junior system making 47 appearances for Tomahawks and Mohawks before progressing via the NIHL2 Warriors (24 appearances) and into the Chieftains squad. During his junior career, Callum also played for GB Under 18 winning a world championship bronze medal in 2016. At senior level, Callum has won a clutch of medals for the Chelmsford Chieftains whilst making 52 appearances scoring 2 goals and 5 assists for 7 points. 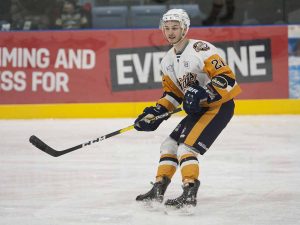 “I’m extremely excited to be returning to the Raiders this upcoming season, the new league structure looks great and we have some big competition to compete with and I believe the team we have are going to fit in just fine.

“Last season ended on a bit of a downer for me, I injured my knee, and since then I have had a lot of physio and have been working in the gym which has helped me with my recovery. My knee is strong again and ready for September.

“The fans were amazing last season and I know they will be even louder this season coming.
See you all in September for a great season”

Coach Sean Easton referred to early concerns that Callum may not be able to return for the National League campaign.

“I am pleased Callum has been able to commit to the new league. He is a firework on the ice and each shift he makes something happen be it a good pass, shot, big mid ice hit or a fight. We have all seen what a good skater he is and likes to play an offensive game. We will be looking for Callum to add more to his offensive game this year as well as being a more imposing figure”.

The fans certainly do appreciate his capable but restrained physical style and will be looking forward to another season from the number 21.

It is also a big Raiders welcome to Jack Flynn, the first Raiders 2019/20 player to be announced who has not played previously for Raiders or for the Romford junior system.

Jack was nicknamed “Fridge” by the fans in Aberdeen but we suspect it was not just because he is cool. Jack turns 23 years of age next week, in keeping with the low average age of the team, and stands at 6 foot 3 inches weighing in at 98 kgs bringing some welcome size.

Despite being born in Carshalton, Surrey it has been a long process for Jack to be classed as a British player and he is, as of this season, on the basis he only holds one passport which is British. The revision to the eligibility rules enable him to play as British for the first time, and consequently last season he was classed as an import for Aberdeen.

Raiders have been engaged in discussions with Jack for some time and were surprised when his long campaign for British player status was finally successful during the general British eligibility review recently undertaken by Ice Hockey UK.

Despite being born in Surrey Jack saw his first ice hockey game in Germany at the age of six and as a result joined the schools hockey programme for Kolner Haie. At the age of eleven his family moved to South Africa, but each year he travelled back to Europe to attend ice hockey camps. At 18 he came to Britain and made 13 appearances for Coventry Blaze NIHL 2 before he accepted an invitation to play for Bradford Bulls in Greater Metro Hockey League (GMHL) in Ontario making 82 appearances in two seasons scoring 14 goals and 26 assists for 40 points.

Jack also had a season in USA playing in the Western States Hockey League (WSHL) starting with Southern Oregon Spartans and finishing at Bellingham Blazers making a total of 41 appearances scoring nine assists.

Last season Jack was the import for Aberdeen Lynx in the SHL making 16 appearances scoring five goals and 10 assists.

Jack is clearly very excited to finally get to play in the UK under his British passport as he explained: 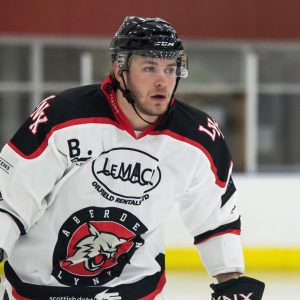 “This year with change in criteria, I’m now rightfully categorised as British, the only passport I hold. As soon as my status was made clear, Sean signed me! I am so determined and committed and really excited for the new season with the Raiders.”

Since so few will know of him he was happy to let us know more about his game:-

“I’m happy to play forward or defence, I shoot right and focus on creating chances for my team; it’s all about the team!

Sean Easton summed up the watching brief the management have had awaiting Jack’s status clarification and explained what we saw in Jack during his early trials.

“Jack will be a surprise package in our league. New to the league and we can expect Jack to skate hard every shift, finish his hits and cause defensive units a nightmare when he is on the ice. Jack has size and strength and will play well in the dirty areas creating time and space around him. I am looking forward to see what Jack can bring to the Raiders”.

Welcome aboard Jack and get composing G&B for a new song for our latest player.