We are delighted to offer a warm Raiders “welcome home” to another former Romford Junior as 24 years old Jacob Ranson returns for his fourth stint as a senior Raider.

The speedy and tenacious forward has made 85 appearances (ranked 88th overall for Raider appearances), scoring 20 goals and 13 assists for 33 points (ranked 125th overall in Raiders scoring).

Jacob returns to Raiders from Streatham where he has played for the Redhawks since leaving the London Raiders in January 2017. Like the majority of his team mates this season Jacob spent his early years in the Romford Junior System before moving to Canada in 2009 to join Pursuit of Excellence Varsity. In 2012 Jacob continued his hockey education in Sweden Junior 18 Division 2 for Mjolby where he made 20 appearances, scoring twice with three assists for five points.

Jacob started his senior Raiders career in 2013 icing for London Raiders at Lee Valley, making 19 appearances but splitting the season with Milton Keynes Thunder where he also made 19 appearances scoring 2 goals and three assists for five points. 2014/15 saw Jacob back with the Raiders making 44 appearances scoring 15 goals and six assists for 21 points notable picking up the Supporters Player of the Year for his considerable efforts. 2015/16 saw him ice for Invicta Dynamos and also for EPL league champions Basingstoke Bison making a total of 68 appearances, scoring 10 goals and 15 assists for 25 points.

2016/17 saw Jacob return to London Raiders making 14 appearances scoring 3 goals and 7 assists for 10 points before moving to Streatham where he has spent the past two and a half seasons, where in 95 appearances Jacob scored 12 goals and 16 assists for 28 points. 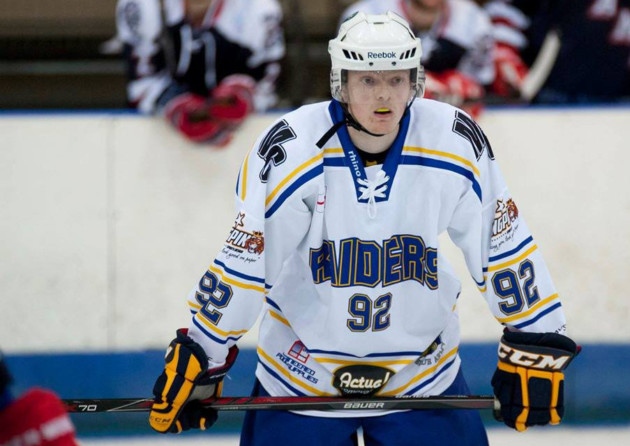 Jacob is keen to get back to work as he explained.

“I’m keen to test myself in the new look National League and I think playing against the northern teams is a good step up. I’ve thoroughly enjoyed playing against a number of the former EPL sides in the last two seasons and want to keep challenging myself at a high level.

As far as the new league is concerned he is looking forward to the undoubted hard work ahead.

“It’s a new challenge for the Raiders, it will be tough, but we go into it as underdogs which is a fun place to be. Saying that when I grew up watching the Raiders it was against the likes of Sheffield, Telford and Milton Keynes Lightning so it’s back where the club belongs.

“One thing anyone who knows me will know is that I’ll give 110 per cent every time I step out on that ice.”

Coach Sean Easton summarised the thinking behind Jacob’s signing as he explained.

“I am pleased to be able to work with JR this coming season. He is like marmite, a terror to play against with his speed and fore-checking abilities. But with him on our side now it will be great to see him in the Gold and Blue.

“JR will come in to play a role, for me his PK abilities and shut down game can make him an important part of our success.

“I have been looking to finish the team’s signings making sure we had the right fit and JR is passionate about the game, conducts himself in a professional manor and will fit into the team’s style of play.”

On the general “style” of the squad Sean felt the need to talk about the build-up of the team.

“I feel we will have one of the fastest teams on the ice and we have recruited speed as it is going to be important to be able to out-skate teams even though we may not be “stacked” in experience. But we will have a tenacious young team that will compete and play using that speed to our advantage. We also have a team that hopefully can play together for the next few seasons without many changes, which means we are building for success rather than buying success. With the average age of 24 we will have the youngest squad in the league, but we are keeping to the ethos of development and even though for some we may not be tipped for success now, in 2-3 years’ time the trophy cabinet shall be well and truly dusted off.

“We have also looked at increasing our size and power, with a lot of teams carrying size and skill, it’s important that with our speed we can also compete physically. With signings of Jack, Mason, JJ, Oleg we will be able to compete physically in the small areas of the ice and not be knocked off the puck as easy.

“Marek and Lukas may be the un-known imports without the pedigree behind them (does everyone not start like this?) I believe they could be well-known names within the league come this time next year. Both 6ft plus adds size and strength to the team; both great skaters and both have only progressed in their careers so far and at the age of 22/23 they will now start to create their pedigree and this will be a great opportunity for them which we are convinced they will be determined to grasp.

“We also continue with the development in being able to have at our service young guns of Huggett, Hill, Hitchins and anyone else that wants to work hard and develop to be called up to the Raiders National team from Raiders 1.

“So with now a roster of 22 players, we have the depth to deal with the long tiring season ahead. We will have the legs to out-skate teams week in week out. It’s now about building a trusting relationship and building the family to go to battle for each other every game for the entire season. I believe if we play with heart, discipline and togetherness we could be the Leicester City of the National League”.