The team building continues and local talent is especially pleasing to announce when they are as popular and effective as these two.

Raiders management will be as happy as the fans to announce the return of two-time Supporters’ Player Of The Year Brandon Ayliffe for his third senior season in Gold and Blue. His all action style of play endears him to the Raiders’ supporters and he is a constant thorn in the side of opposition teams.

Last season, Brandon was a Raiders “Ironman” playing in all Raiders 48 fixtures, scoring 12 goals and 20 assists for 32 points. He has now made 93 appearances for the Raiders for an all-time appearance ranking of 77th, scoring a total of 21 goals and 31 assists for a total of 52 points (ranked 92nd all-time scorer).

Brandon played his junior career at Rom Valley Way, moving to Chelmsford after the rink closed. He continued his progress through the Chelmsford junior system before making his senior debut for both the Warriors and Chieftains in 2014/15 aged 16. By the time he moved home to the Raiders he had made 68 appearances for the Chieftains scoring 7 goals and 13 assists for 20 points; and for the Warriors he made 49 appearances, scoring 60 goals and 37 assists for 97 points. He picked up number of NIHL League, Cup and Play Off winners medals as a member of the all-conquering Warriors and Chieftains teams. He also made an appearance for England Under 19 in the annual match against Scotland in May 2017.

Brandon had no doubt that he wanted to return for another season explaining “it was more about whether I was picked or not for me,” demonstrating a humble side to his character. 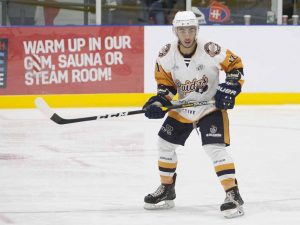 As a two time winner of the supporters’ player of the year Brandon explained the value of the award and how he would “love to win the award for a third season and match the achievement of Romford legend Rob Stewart, the only player to have previously done so”.

Brandon’s summer schedule is as busy as the rest of the year as Roller Hockey helps to keep him fit and helps with his aim of returning “with greater strength, speed and raising his skill capability”.

“The National League step up is going to be huge. Having seen videos on other teams games and it seems like all the teams have potential but are very different in their own ways. Hull look like they could be more of a challenge to compete against especially considering their success last season”

Sean Easton’s call to Brandon was a simple one.

“Brandon’s a real fire cracker. Unbelievable speed that causes trouble with every other d core. Brandon scored some “clutch” goals for us last season using his speed and skill. He is starting to become a PK specialist and it really is great to see these young stars develop into reliable specialised players. Again Brandon improves year on year so it will be rewarding to see another break out year from him”.

Jack Cooper also returns for what will be, surprisingly, his sixth season for the Gold and Blue since joining from Haringey Racers.

Last season Jack was also a Raider’s “Ironman” but in his case for a second consecutive season playing in all Raiders 48 games, and taking his unbroken run of appearances to 116 games dating back to 17th December 2016. Last season Jack failed to light the lamp but assisted on six Raiders goals.

In total Jack has made 205 Raiders appearances since his debut against Chelmsford Chieftains at Lee Valley, giving him an all time appearance ranking of 22 and has scored two goals and 30 assists (for an all time scoring ranking of 130.

Jack is keen to start where he finished as he enjoyed a strong second half to last season.
“We had quite a significant amount of injuries last season which left us short benched for a load of games meaning a lot more ice time for me. Having more ice time in games helps boost confidence and I guess that is what mainly improved my performance”. 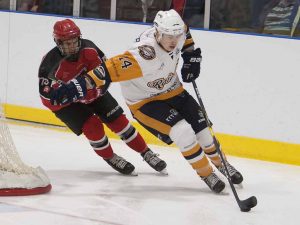 “I take each shift as it comes, I like to see what sort of game it is going to be and then adapt to how the style of the game is. My main target every game is to not allow a goal which is probably obvious being a defenseman!

“This season we seem to have a number of D-men that can jump into the play and adding to the attack. Having Scotty’s shot from the blueline is a big plus as well. With the team Sean is putting together I think we should be pushing for a top 3 finish”
Jack’s occasional goals are generally the most celebrated in the stands as he explained
“It’s always nice to get a goal or two (I know my scoring record is a running joke in the club haha) but I am not a player that will put my needs first, if I don’t score a single goal all year but as a team we win, it doesn’t bother me. In recent years, our club has been near enough top of the league for penalty minutes. I think it’s just the way we play, some of it comes from stupidity on the ice from choices we make in the heat of the moment. If we can cut that out, I believe we will achieve much more as a club, discipline is a big part of building a great team.”

Sean Easton’s summary backs up those thoughts as he added:
“Jack is our forever improving steady Eddie. He does his job extremely well, and has become a reliable calm headed defensive defence man. No frills and no risks but takes pride in his plus minus and can shut down scoring threats. Good size and strength helps Jack in battles and calm thinking gets him out of tough situations”