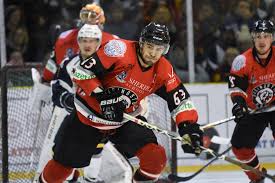 Aaron is a proven winner, leader and motivator having won trophies with each of his senior teams. Last season Aaron scored 41 goals and 31 assists for 72 points in all competitions and finished eighth in the league scoring charts, picking up the league Player of the Month Award for December and being selected to the NIHL All Star 2nd line alongside last seasons top scoring Raider Juraj Huska.

Aaron’s Bison career ended with Man of the Match performances in leading the Bison to the NIHL Play Off Finals in Coventry, scoring a hat-trick in the semi-final v Sheffield Steeldogs and one in the final against Telford Tigers as well as joint player of the year at the Basingstoke awards evening.

Aaron spent the early stages of his junior career at Invicta, and made his Dynamos debut in 2007 at the age of 13, scoring a goal and four assists in his five appearances. He moved to the Chelmsford junior organisation in 2008 and in addition to his junior appearances, he made his Chieftains debut the following season. In his three seasons at Chelmsford he made 66 appearances scoring 45 goals and 30 assists for 75 points.

In that time he won the NIHL South 1 and Cup before moving to Slough in mid season 2010/11. At Slough he made 114 appearances for the Jets scoring 32 goals ands 23 assists for 55 points, winning the EPL Play Offs in the process. Aaron was selected to represent Great Britain at both Under 18 and Under 20 world Cups, captaining his country at the 2012 championships. In his 14 World Championship games he scored five goals and an assist for 6 points.

Aaron has spent the last five seasons at Basingstoke where was captain for the past three seasons leading them to both EPL and NIHL South 1 titles, in addition to the EPL Cup and Play Off trophies he won in his first Bison season. In total Aaron iced 275 times for the Bison, scoring 129 goals and 117 assists for 246 points. Last season’s 20 penalty minutes was his lowest, demonstrating his progressing focus on the main task of staying on the ice and racking up points.

Aaron’s notorious energy for the task ahead shone through as he enthused:-
“I am really looking forward to joining the Raiders and can’t wait to get started. I was really impressed with the way the Raiders played last season and hopefully I can help the team to winning some silverware. I think the supporters have waited long enough now and I can’t see any reason why we can’t achieve that goal.
I know a fair amount of the team and Sean Easton from my time in Chelmsford. I also know a couple of the boys from under 10s when Invicta and Romford joined forces to make the Thames Terrors.

Coach Sean Easton clearly remembered previous times with Aaron and the reasons for adding him to the Raiders squad:-

“I have known Aaron for some years and coached him as a junior. From juniors to now he is still a leader on and off the ice. Aaron has demonstrated at Basingstoke that he can drag and motivate a team through the good times and more importantly the tough times too.

“As a player Aaron is a top class within our league and could make the step to Elite League Hockey. His high energy and high skill-set fits Raiders Hockey perfectly. You only need to look at past stats that Aaron is always heavily involved in the points.

“Aaron will be a fan favourite really quickly with his never say die attitude in his play; he will skate through brick walls to make sure the team succeeds with a very professional attitude.”