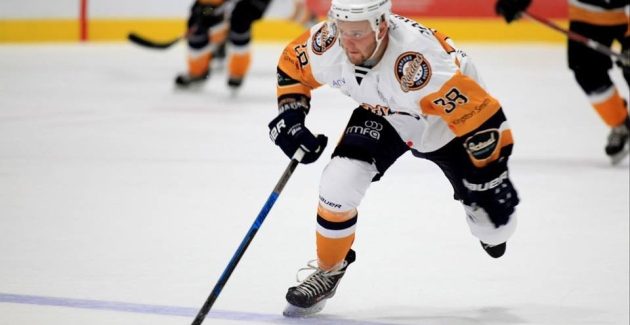 Everyone Active Raiders have announced the signing of Slovakian Filip Sedivy to replace fellow countryman Martin Jakubek who has left the club by mutual consent.

25-year-old forward Sedivy, who was in born in Trencin and spent his youth in the Dulka Trencin junior teams before dropping down to Slovakia 2 at under-18 level with Prievidza.

During his time at Prievidza he averaged a point per game before moving to HK Bulldogs Trencin in the same division.

At under-20 level Sedivy netted 27 goals and picked up 67 assists for 94 points in 37 games before heading off to North America for three seasons.

He started his time across the pond in the Atlantic JHL with the Washington Nationals, where he scored eight goals and 17 assists in 72 games, before moving to the Alliston Coyotes in the Greater Metro Hockey League.

Sedivy then moved back to Slovakia, where in three seasons he played for HK95 Povazska Bystrica, HC Topolcany and HC Detva – he netted a total of 12 goals and 27 assists for 39 points in 89 games and was part of the Slovakian Division Two championship winning team at HC Detva.

He then spent last season in Germany Division Four, scoring nine goals and 16 assists for 25 points in 27 appearances for Soester EG.

The move to recruit to sign Sedivy came on the back of Jakubek departing the club due to his personal situation changing.

The 25-year-old Jakubek joined the club from Slovakian outfit MHK Dubnica, where he has spent the last season and a half and helped them gain promotion to Slovakia Division Two, during the summer to join fellow Slovak Juraj Huska to make up the club’s import quota.

Jakubek progressed through the junior teams of HK Dukla Trencin, the same club as his uncle Pavol Demitra, before going on to play in all three tiers of the Slovakian leagues amongst other ventures in Czech Republic, Poland and Germany.

The forward played in the Raiders Legends match and picked up man of the match after finding the net a cople times during the match.

He then picked up two goals and one assist in his side’s 21-1 victory against Raiders NIHL 2 team in a pre-season challenege match last weekend.

Head coach Sean Easton said: “It’s a great shame too lose a player of Martins standards, but his UK based situation has changed so Martin will go back to Slovakia where he has been asked to trial for Slovakian top league team.

“Both parties agreed Martin’s release back home was the best solution all round.

“We wish Martin all the best back home and shall keep an eye on his progress there.”

Before adding: “But without hesitation we would like to welcome to the Raiders our new Slovakian signing in FIlip Sedivy.

“We have Martin to thank for recommending a replacement so quickly and bringing Filip to the Raiders.

“Filip skates well, has good agility and considers himself a team guy.

“He specialises on the powerplay which is something we have arguably lacked in the past season.

“Filip comes highly recommended by a lot of respected people, and after doing my research and contacting past players and friends about Filip everyone said he is the guy.

“Filip jumped off the plane into Stansted late Friday night and will be thrown in at the deep end against Bracknell where the only player he will know is fellow team mate and Slovak Blahoslav Novak who he has played for and against whilst they were both in Slovakia.”

Courtesy of the Romford Recorder