Raiders announce the first of next season’s squad.

As the NIHL hockey aficionados gather in Coventry for the jamboree event that is the final 4 weekend, the Raiders are pleased to be able to announce that their plans for being able to join the top 4 from the new national league are in full swing.

The Raiders climb from a “homeless” team with barely 100 diehards in the stands wont have escaped the attention of hockey fans and we intend to maintain the progress whilst keeping a very focused eye on sustainability.

Key to that momentum was the re-signing of a pair of very influential players that wore the Gold and Blue for the first time last season and saw their efforts rewarded with trophies at the end of year awards evening.

The first release for the new season is fittingly the man that welcomed each player onto the ice and provided the sort of leadership by example that a Captain really should offer, both on and off the ice. We are of course alluding to the inimitable #63 Aaron Connolly .

Aaron, always ready for some words of encouragement was keen to give them to acknowledge his decision to return.

“It’s an honour to be back for another year and I can’t wait to play for the Gold & Blue fans again. It’s certainly exciting times in Romford. This club is moving in the right direction and the success will come. The work is already being put in to make sure we’re better on and off the ice next season.

The club steps into a new league this year, which for everyone will be a bit of the unknown, however one thing for sure is that this is going to be a much improved league. We as a team will have to be putting a lot more work in this summer to make sure we’re ready to go come the first puck drop in pre-season. I can assure you that the boys are already working on this and we all know we’re in safe hands off the ice too.

For the fans, I hope you all enjoy your summer and give your voices a much needed rest as we will need you again come September”

The Raiders management saw Aaron as an important returnee this season and “the value of his leadership and effort cannot be underestimated. Rarely do you see a player give so much for the entire 60 minutes and his encouragement for his team to do the same is clear to see and inspires them to achieve that little bit more. That sort of attitude was no doubt a factor in Coach Sean Easton presenting his coach’s award to Aaron on 5th April” 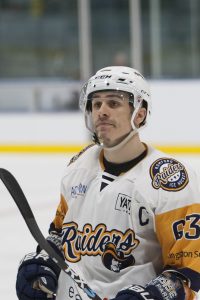 The second returnee, given the hint that he was also a winner at the awards evening, will also be no surprise but a welcome one nevertheless.

#13 Dan Scott had a fantastic debut season and we are delighted he has also shown his confidence that returning to the Raiders will allow him to add to his trophy cabinet as Raiders press to move their way up the league tables. Apart from his unquestionable security in D we have all seen his influence on other players and watched as his line-mates game has improved by his example. And that bullet from the blue line is often worth the admission fee on its own.

Dan offered his message to the supporters to keep doing what they are doing.

“Obviously I’m excited to be back with the Raiders for the new season and the new challenge. Last year didn’t go quite the way we planned but I feel the club is definitely moving in the right direction. The new league structure is definitely going to be a challenging one as the teams involved are all good teams, but I believe Sean will put together a team more than capable of competing with the top teams, if not challenging for trophies.

“I’m sure the fans are going to enjoy seeing some new teams at the Sapphire next season, so make sure we keep the place rocking and make it an intimidating place to play. 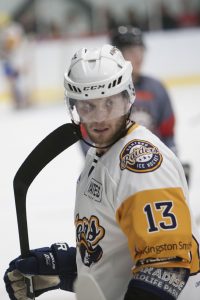