Raiders are delighted to announce the return of Players’ Player of the Year Michael Gray for his tenth season in Gold and Blue. A regular “man of the match” award winner last season, and arguably missing out on a few more in the eyes of many, Michael’s popular return was in little doubt in the eyes of Raiders management.

Last season, Michael made 45 appearances for the Raiders, spending 1859 minutes between the pipes, facing 1192 shots conceding 109 goals for a 90. 86 save percentage.

Michael’s return for the Gold and Blue will extend all club netminding records (netminding minutes; appearances, shots faced; saves) that he currently holds. Michael has made 294 appearances for the Raiders (12th position overall) and 117 more than the second best appearance record for a netminder (Russ Jackson).
To date he has spent 13635 minutes between the pipes for the Raiders, has faced 8550 shots and conceded 857 goals for a 89.98 save percentage.

In addition Michael appeared for Romford Spitfires in seasons 2006/07 and 2008/09 making 21 appearances for a 88% save percentage. Michael played most of his junior career in the Slough organisation where he made his senior debut for Sough Harrier Hawks at 14 years of age. After a spell playing for Chelmsford Under 19s, he moved to play for Romford’s second team (Spitfires) and the Under 19 Buccaneers.

Michael subsequently had a season icing for Streatham Redskins and apart from a brief spell at Invicta Dynamos and a season not icing, Michael has iced for Romford / London Raiders and Romford Spitfires since 2006.

Michael is typically up for the job in hand, as he explained:-
“I’m really looking forward to the start of the season. The new league is going to be a massive challenge for the Raiders, the club as a whole has done an amazing job in getting a team prepared for this new league and I cannot wait to be a part of it.

“This is the only club I want to play for and it has a place in my heart as I’ve had the pleasure of playing for the Raiders now for 10 seasons (with the odd little break haha).

“I’m so happy that the coaching staff wanted me back as this young team is shaping up very nicely with me looking like the grandad figure this year. Also just wanted to thank the fans for the amazing on-going support they give us every week” 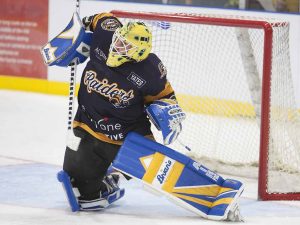 Sean Easton confirmed the general management opinion as he put on record:-
“ P head is a game winner. His compete level is second to none which makes him a valuable and important signing to the Raiders. Since Raiders have been playing in this new league, P Head’s game has come on leaps and bounds. We do however hope to make his season a little less stressful for him this year and keep the shots against down!”

Michael will be getting assistance from a youngster that all the Raiders regulars have enjoyed watching these past few years and the promise that this young prospect has shown for a long time is being confirmed as he is challenged to stake a regular starting slot over the coming years.

17 year old Netminder Brad Windebank steps up from being the regular Raiders 2 netminder to replace the departed Ben Clements and to hopefully start a legacy that will in time rival that of Michael Gray’s.

Last season Brad played a pivotal role in the Raiders NIHL2 team, earning recognition from players around the league in being voted to the League All Star second team. Brad missed just one game for Raiders 2 (due to a Raiders 1 call up) being in the net for 1483 minutes facing 987 shots conceding 99 goals for a 89.97% save percentage. Brad also spent 110 minutes in the net for Raiders 1 conceding 3 goals from 50 shots for a 94% save percentage. Brad also made six league appearances for the Raiders Under 18 team and had a 98.7% save percentage.

Brad played his junior hockey for Romford until RVW closed down, and played three seasons in the Chelmsford junior organisation, two at Under 15 and last season at Under 18. Brad has had a save percentage exceeding 90% , with a best of 93.5% in his final Under 15 season.

Brad has been a regular in the South East Regional team at every age group winning the tournament MVP at Under 11. He has made six appearances for England Under 13 in Pee Wee competitions, and has made five Great Britain Under 16 appearances in two tournaments where he produced a save percentage exceeding 95% in both.

Brad commented that:- “I was very surprised when Sean approached me about signing for the Raiders this season as I have only played one full season in adult hockey. Last season with the then NIHL 2 Raiders was really enjoyable seeing so much ice time and facing a lot of shots, it was definitely a steep learning curve.

“I know I will be playing a different role this season being a back-up, but I am really looking forward to the step up and if I am called upon I will play to the best of my ability to help the team anyway possible.

“For me it is a real honour to sign for the Raiders especially now hockey is back in Romford where I began playing for the juniors some 12 years ago now. I have watched the Raiders home and away as a fan since I was 3 so it is a real privilege to sign.

“I am very grateful for this opportunity and the faith coach has in my game and can’t wait to get started now and hear the Raiders fans get behind us home and away.” 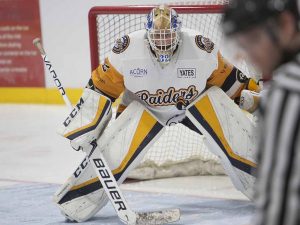 Coach Sean Easton is pretty convinced of the progress path Brad is taking and understands the additional value a local talent can bring.

“Brad is a Romford original, learning his trade through the Romford Juniors system before having to find pastures new while Romford was out of action until the Sapphire was built. Brad is a highly rated goalie, representing Conference, England and Great Britain through his junior years. Brad had a good first senior year for our NIHL 2 team and has now accepted a new challenge in the new National League”.

Any game Brad steps between the pipes is going to be a big moment for him this season and one thing we can be certain of is that those in the stands will have his back and give him whatever encouragement he needs.