The Raiders organisation are delighted to announce the return of yet another former Romford junior to the National League team.

The recent poor luck with netminder injuries will mean that this signing will be no surprise but nevertheless a significant relief in maintaining the progress that has been seen in recent years in building a competitive young squad for the top “British” League.
20 year old netminder Ethan James returns at last to the UK to play for the Raiders National League team.

Ethan joins the Raiders from Canadian Premier Junior Hockey League team Essa Stallions, where he has played for the past four seasons, backstopping them to championships in each of the past two seasons. In each of his previous seasons Ethan has posted 90%+ save percentage, with a high of 94.5% in 2017/18.

Ethan also had one other season in Canada, playing in 2015/16 for Coldwater Falcons in Greater Metro Hockey League.

Ethan has represented Great Britain at three Junior World Championships representing the Under 18s in 2015/16 and the following season; and for bronze medal winning Under 20’s in 2017/18.

In UK junior hockey, Ethan played in Romford junior system until moving to Okanagan Hockey Academy where he played for three seasons for their Under 16, stepping up in his last season to also ice for the Under 18s. In each of his seasons he has a save percentage of better than 92%, peaking with 96.4% and a 0.71 Goals against average for the Under 18’s in the England Championship season in 2014/15.

Coach Sean Easton has had discussions with Ethan before but now is a good time for the move to be finally completed and had these words for the arrival of the 4th Netminder in the squad.

“Ethan coming in helps us out with goalie depth with P Head and Greg suffering most recently and of course Brad’s long term injury suffered in game 1. Ethan’s signing is also in keeping of the theme of young local talent.

“Ethan has for good reason always been seen as a top-end Netminder, representing GB on a number of occasions through the junior team programmes. Competition and depth are important to teams in a long hard season, and keeps players fresh and hopefully injury free whilst still competing hard to play the minutes come game time”

Ethan flew in at the weekend and trained on Tuesday to be available for this weekend’s action potentially facing three of the league’s top points scorers as the Pirates no doubt look to get some revenge for the loss in Hull earlier this season. 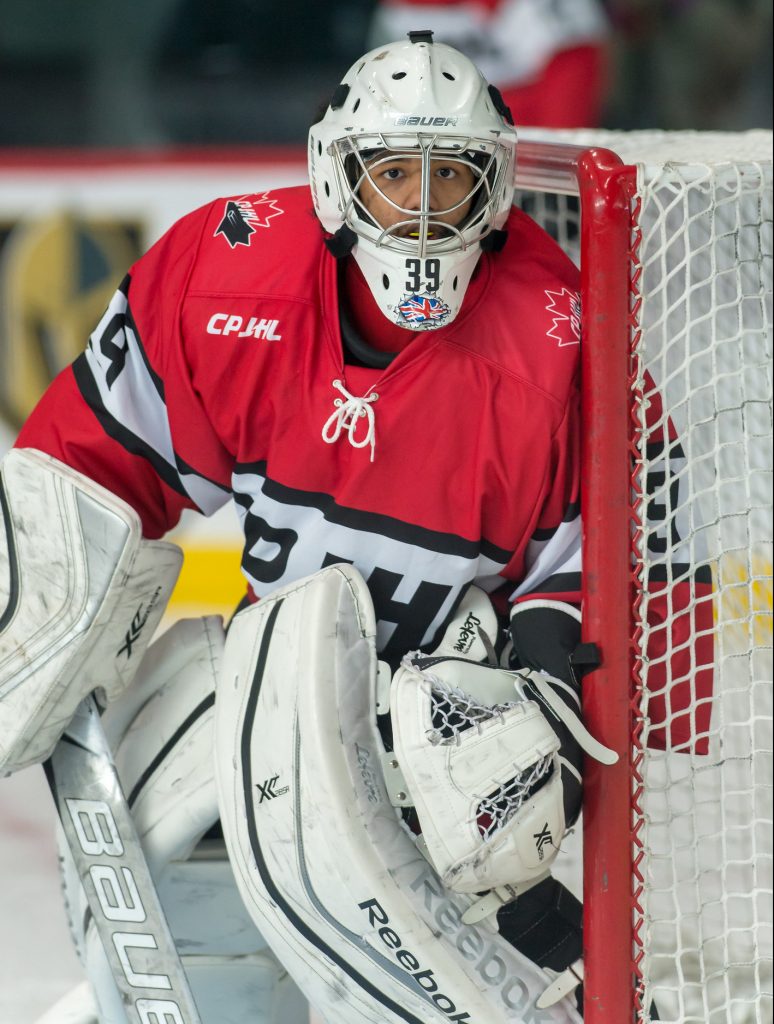 Ethan is keen to get back into action as he explained his return.

“It all started with in line hockey which my mum had been involved with. Then I moved over to ice at Lee Valley. At under 12 I moved over to Romford under Lenny Cole and remember at my first training session how everyone just stopped and skated to the netting to welcome me and wherever I have been since then I always consider myself a Romford boy.

“I have been very lucky to “Live the Dream” of many young hockey players playing the sport I love in Canada. It has definitely taught me a lot not just in Hockey but also life experience. It’s been a dream life, ice training 4/5 time a week depending on how many games that weekend. Games can vary between a 3/2/1 games over a weekend depending on distance of the away games. I would usually go to the gym 3/4 days prior to going on the ice, but always a rest day before a game day.

“Coldwater, where the Essa Stallions play, is a pretty remote place about a 90 minute drive north of Toronto and I have loved the difference; being a bit remote did make me concentrate on training as distractions were few. Coming home to London is always great though and reminds me I live a great city. This was my last junior hockey year, and this opportunity came at the right time so I had to do what was right for me and start a new chapter in my hockey career.

“I am already familiar with most of the squad having played with Ayliffe, Wells and Burnett, Lascenko, Sylvester, Windebank, Cooper and Baldock through conference so I am sure I will settle in pretty quickly.

“It has always been in my plan, to come back to Romford, although I wasn’t sure when. It feels right for me to be at Romford now. Training with the lads over the summer has always been great, and with the talent we have it’s a great base to rebuild Romford.

“I always try and give my all when I step on the ice and hope I can contribute to the Romford rise. In terms of the future, who knows what’s around the corner? I take each day, game, season as it comes and will deal with what-ever is put in front of me at the time”.

Welcome back to the UK and to Romford Ethan.