Raiders to brush off the rust in a pre-season double header.

With the fixtures almost ready to reveal the Everyone Active Raiders and Bracknell Bees have jumped ahead of the crowd to announce a pre-season challenge to get the legs stretched ready for the historic start of a new era of National League Hockey. And who better to play than the team Raiders have challenged in the middle of the pack for the past 2 seasons? 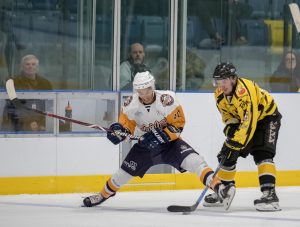 Raiders will be travelling to the Hive on Saturday and then look to throw the doors wide open on Sunday at the Sapphire to welcome back the Raiders faithful after several months of showing their support in season ticket and shirt purchases and generally nagging us for some news.

Our ticketing site is already up and running so get your tickets for this preseason get together and general rehearsal of new songs to get your tonsils oiled.

New players, new kit, new sponsors, new prizes, some new fans a few surprises and a whole lot more for the first game in the National League as Raiders seek to continue their progress in the Sapphire.