Following the emotional scenes at Bracknell on Sunday the Raiders management are saddened that the assurances given at the start of this season from one player have been put into print. When it is player so popular and a talent so valuable you always hope for “just one more season”.

Matt Turner is to hang up his Raiders skates and take a very well deserved break. And who would be able to blame him or begrudge him his decision?

Sure we will all miss his constant effort, dazzling skills and the ability to hold play like few others. To do so with barely a complaint for the treatment he recieved at the hands of the opposition was a feat in itself. But personal life eventually has to take its deserved priority.

Matt’s words are repeated below↓ 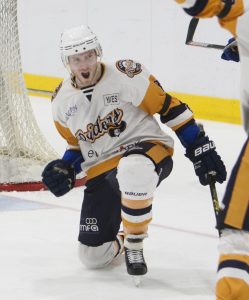 I would like to start by saying a huge thank you to all that have supported us this year, without you guys we wouldn’t be here. Your support doesn’t go unnoticed You truly are the best fans in the league!!

It’s been a tough year with ups and downs and unfortunately it ended prematurely. I’m sure with you guys behind the team next year Raiders will come back stronger and hungrier to bring home some silverware.

It’s a hard pill for me to swallow but unfortunately I will not be returning to the Raiders line up next year. With a young family at home (a future Raider) I cannot commit to the new league structure as family now comes first. As it stands I’m currently in ‘retirement’ but hockey is my life so will I play again?….. probably, whether it’s a league below part time or rec we will see. Knowing me I’ll probably be on the ice with Sean during the summer anyway. 🤦🏻‍♂️

Romford Raiders have been a huge part of my hockey career and I can’t thank the organisation enough. I played some of my best hockey in gold and blue and loved every minute of it. We’ve shared some amazing memories and I’ve made some friends for life. There has been some special people at this organisation past and present, Mick Cahill, Ollie Oliver, Jesse Hammil to name a few and obviously John Scott, Sean and Alan all of which have a had a huge impact on my career. I can’t thank the organisation enough and you the supporters for all you have given me and I’m sure with the way the team is going Romford will have success in the very near future. With Sean at the helm and with the young guys coming through you will see silverware at Sapphire very soon!

I wish you all the best for next year, keep being loud keep being proud and I hope to see many of you at the end of season do!

Knowing this day would come for a while now, and it still sucks to lose Matt; a great player but more importantly a great person!
Been a good mate of mine for some years now playing through juniors together and then having the privilege to coach Matt for the past 6 or so seasons.

Sorry I damaged your neck back in juniors!

Thank you and farewell to your Raiders’ hockey career Matty Turner. But dont think that your farewells at the awards evening will be any less emotional just because the words are already out in the public domain.