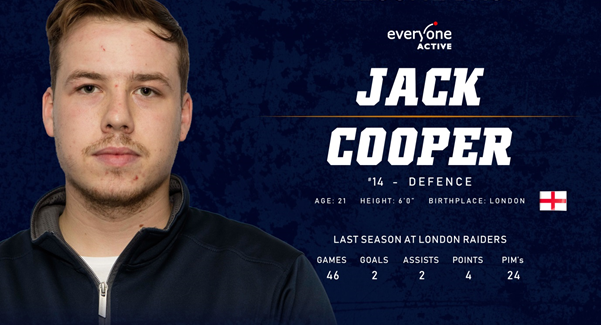 #14 Jack Cooper returns for his fifth season for the Gold and Blue since joining from Haringey Racers. Still just 21 year old Jack progressed through the Romford junior ranks, making 72 appearances, scoring 35 goals and 35 assists for 70 points, and started his senior career with Romford Fury in NIHL2 making 17 appearances scoring 2 + 2.

With the closure of Rom Valley Way, Jack moved to Haringey to ice for the Racers in NIHL2 making 26 appearances scoring 5+5, and wore the “A” in his second season.

In November 2014, Jack returned to the Raiders making his debut at Lee Valley against Chelmsford Chieftains, and has gone on to make 157 appearances in all competitions (ranked 33 in all time Raider appearances), including 114 in NIHL1 league games. He was as mentioned earlier an Iron Man last season, appearing in all 46 games; and he has the longest unbroken run of appearances having not missed a game since 11th December 2016, a run of 68 consecutive appearances. It is worth repeating this is all by the age of 21.

Jack’s points tally in his 157 appearances is two goals and 24 assists for 26 points. His first goal came in his 131st Raiders appearance in Cardiff in December 2017 and just surpasses Tyrone Miller’s previous record total of 108 consecutive games without scoring.

As a local lad that could easily walk to the new rink, the move back to Romford was clearly a great blessing for the player that saw many successful junior seasons in Rom Valley Way.

“I’m really happy to be returning to the Raiders again this year. We had a great season last year and achieved goals no one expected us to. I think we will finish higher up this season and win some silverware.”

Coach Sean Easton offered his summary of the returning D-man

“Cooper improved as the season went on to the new league skill set. Cooper has a very calm head in difficult situations and his decision making is fantastic”