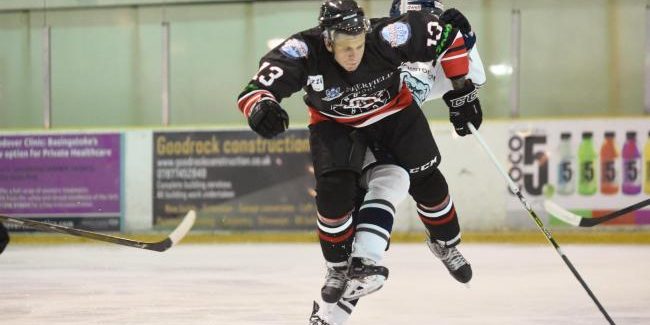 The next announcement is of course, as anticipated on virtually every form of social media, the vastly experienced Dan Scott who also joins from treble winning Basingstoke Bison. Dan’s performances last season saw him selected to the NIHL All Stars first line and Basingstoke’s joint player of the year recipient. He becomes the second Dan Scott to ice for the Raiders, twelve years after his namesake.

Now 26 years old Dan played his junior career at Invicta, making his senior debut for Invicta Dynamos during the 2006/07 season aged 14, before finishing his junior career at Northwood School in U.S.A. He was selected to appear for Great Britain in three world championship campaigns, one at Under 18 and two at Under 20, picking up a bronze medal in the first and captaining his country in the second.

On his return to England in 2010 Dan joined Telford Tigers and shared the season with Elite League Coventry Blaze. The following year he played for Hull Stingrays in EIHL taking his total of Elite League, Cup and Play Off appearances to 68, scoring one goal and one assist.

At Basingstoke, Dan was a key part in the meanest defence in the NIHL when making 77 appearances scoring 21 goals ands 18 assists for 39 points and winning league, play offs and Final Four weekend.

Dan added some words and a brief request regarding his last appearance at Romford.

“I am really looking forward to getting started in the blue white and gold jersey. I’ve just come off a very successful season and wanting to continue that with the Raiders. It was amazing to see how well Sean had his team drilled last year and I’m very happy I am now a part of that.

“I know some of you Raiders fans will remember me for a bad hit but hopefully you can forgive me as JJ has. All banter aside I can’t wait to win some trophies in a Romford jersey”.

Sean Easton is clearly enthused by the latest addition to the squad.

“Dan again like Aaron is considered, for good reason, as one of the league’s top players. He has a big physical stature that is very mobile on the ice. A strong steady d man he will add great depth to the Raiders and for our younger players will be a great teacher and role model.

“Dan also brings a heavy shot from the point and will chip in with his point tally from the back, again this will add to our offensive game along with improving our power play.

“Dan is very professional on and off the ice and will be a great ambassador for the Raiders”.

The Raiders organisation believe that these signings, together with those that remain to be announced, suggest that the team are looking to take a step forward this season. Most of the other teams in the NIHL also appear to be having significant changes for the coming season which must make the anticipation levels of the league’s fans at an all time high and the pre-season predictions will no doubt be even more difficult than usual.