Coaches’ Player Of The Year Barry Back On D 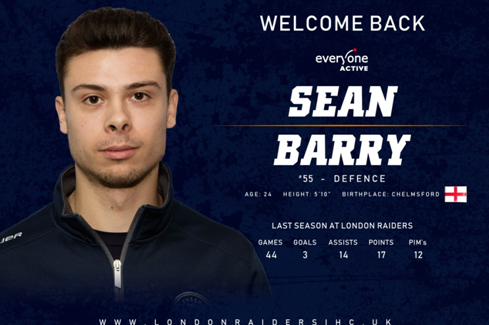 24 year old Sean Barry, the Raiders Coaches’ Player Of The Year last season, is a welcome returnee to Sapphire Ice.

In his first Season in Gold and Blue, Sean missed two games in making 44 appearances, scoring three goals and 14 assists for 17 points. Through 38 league appearances, Sean did not pick any penalties, breaking TJ Fillery’s club record of 35 league games in a season without penalties.

Sean progressed through the Chelmsford junior system before making his senior debut for the Warriors at the age of 16, for whom he made 46 appearances in total picking up 17 assists .
He made his Chieftains debut at the age of 18 in 2012/13 and has been a permanent fixture on the Chelmsford defence in the past three seasons including being ever present in two consecutive seasons.

During this time Sean picked up 4 consecutive NIHL S1 league winners medals as well as play-off and cup competition medals. In total Sean made 160 Chieftain appearances scoring 4 goals and picking up 50 assists for 54 points before his move to the Raiders prior to the start of last season.

Coach Sean Easton summed up some of the reasons for selecting Sean Barry for another term in the Gold and Blue.
“Sean is a dependable player and 100% committed to the team. An agile d man not big in size but moves quick and has great vision on the puck. Sean wants to compete and wants to win everything he sets out to do. He’s a great guy to have in the room too, chatty funny and gets along with everyone.