Raiders are happy to welcome back Current GB Under 18 international Callum Burnett for his fourth season Gold and Blue.

Callum, the first player born in the 21st century to make a Raiders appearance, returns to the Gold and Blue  having played in the Under 18 World Championships for Great Britain in both of the past two seasons making 9 appearances. He also played for England’s victorious Under 19’s in the annual challenge against Scotland last season.

Callum made his Raiders debut in an NIHL league game at Invicta in January 2017 and later that season scored his only Raiders 1 goal, the Raiders 4th goal in a 4-4 draw at Bracknell Hornets.

Callum started his junior career at Rom Valley Way but following the closure of the Romford rink, Callum moved to Slough Jets to progress through their junior ranks. In season 2017/18, Callum moved to Chelmsford making  11 appearances for Chelmsford Under 18 Mohawks, scoring four goals and eight assists for 12 points. Callum has also making appearances each year for South East in the Inter Regional Conference, captaining the team in 2018.  Callum has also made 13 tournament appearances for Great Britain Under 16s, scoring twice with assists on two further goals. 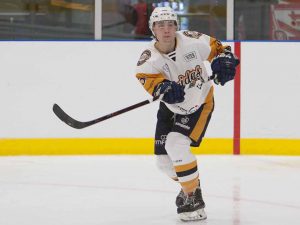 Callum has been working hard during the summer and as a seasoned rugby player, currently touring Australia and New Zealand fitness should not be a problem come the first games in September as he confirmed:-

“Yes I have been doing a lot of off-ice training since last season for the up-coming season as well as in preparation for the rugby tour which has helped me maintain my fitness for the season ahead. This also has allowed me to improve my fitness, further to be ready for what lies ahead next year.”

“Two areas I have looked to improve on are my decision making while on the puck to make the most beneficial play and on ice-skills to be able to execute plays with confidence and accuracy.”

On the national league he is optimistic for the future of the club:-

“The new league is a step forward again for Raiders hockey; it allows us as a club to develop further and play even better hockey. It also allows the team to travel and display what we can do around the country and expand the Raiders support. It’s a great way for the club to play even better hockey set new targets and goals as a team allowing for the team and players as individuals to get better improving our game and putting on good hockey for people to watch”.

The Raiders management are demonstrating their long term attitude with players like Callum the youngest of what will probably be the youngest squad in the league.