Another bumper hockey weekend at the Sparkling Sapphire, this weekend 26/27th January

The 2’s start the action at the Sapphire on Saturday 26th with doors opening at 4-30pm as the Slough Jets are in town. Slough are second in the division to Chelmsford so another cracking game in prospect as the 2’s look to close the gap on Oxford and open the gap to Bracknell.

Whilst the 2’s have the luxury of home Ice the Raiders travel to Milton Keynes to check out the recently reinforced Thunder squad and an indecently late 7-30 face off time. MK may be unusually low in the league but on the large home ice they always prove a difficult team from whom to remove points.

Then the main event. Sunday 27th and the doors open at 4-30pm as usual. Swindon have already had their championship ambitions dented by the Raiders’ two December wins and with their favourite import Jonas Hoog back in the lineup will be more determined than ever to keep their resurgence on track to overhaul Peterborough as favourites for the league title.

Everyone Active Raiders vs Swindon at the Sapphire have been cracking games so far and this one is going to be no exception. With crowds growing week on week an early arrival and a drink will be the ideal way to ensure you grab your favourite pew in the sports enthusiasts’ latest temple! 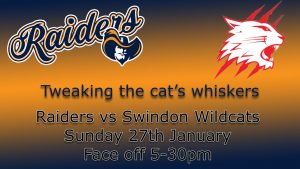 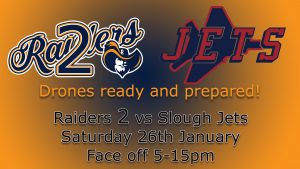