It is a surprise welcome back to the Gold & Blue as 24 year old Lukas Sladkovsky returns for a second season with the Raiders. The talented non-GB trained forward impressed last season and was one of the seven ever-present  “Ironmen” for the team, averaging just over a point a game with 54 points (24 goals and 30 assists) in his 52 appearances.

His 54 points saw him third in points scoring last season behind Aaron Connolly and Erik Piatak. His 54 points also earned him a place in the Top 100 all time point scorers for the Raiders, currently sitting in 98th place, one place behind team mate Dan Scott.

Lukas joined Raiders having spent the previous 2018/19 season split between HC Orlova and HC Tabor both of whom play in Czech Division 3 scoring a total of 13 goals and 14 assists for 27 points.

Lukas played the majority of his  junior career for Sparta Prague averaging a point a game at Under 16 and Under 18 levels. For their Under 20 team, Lukas made 53 appearances scoring 23 goals and 7 assists for 30 points. Lukas also had a season in GMHL League in Ontario Canada for Bracebridge Phantoms scoring 21 goals and 27 assists for 48 points. In 2014/15 he had half a season in German NL2 for Landshut Under 19 averaging nearly 1.5 points per game and at Under 20 level scored 28 goals and 13 assists for 41 points in 21 appearances for MHC Martin  in Slovakia Under 20 Division 2

Lukas’s senior career has seen him play for HC Slovan Usti  nad Labem in Czech Division 2 and HC Decin in Czech 3 before a season playing in  Federal Hockey League (FHL) splitting the season between the fated North Shore Knights (in Canada) ; Watertown Wolves (USA) and Cornwall Nationals (Canada) making a total of 18 games scoring 10 goals and 16 assists for 26 points.

Coach Sean Easton values the Czech forward as he explained

“I’m excited to have Lukas back for a second season. In my eyes he’s the most skilled player in the league. Now he has had a year of experience for how the league works and best suited style of play I think Lukas will be adding a lot more points to his tally.

“He’s a perfectionist, always being hard on himself to be better. Lukas at his young age will come back better than last season.

“What I liked about Lukas’ game, is even though some games he was getting frustrated not scoring every shot, was that every game he was a scoring threat. He was still creating “grade A” chances to score.  That is actually the hard part and he was always in the right areas every game”.

We managed a lengthy “chat” with Lukas, whilst he was touring mainland Greece and some of the smaller Greek islands, to see what he thought of his first season here, how it compared to other leagues and countries he had played in, and how Covid 19 was affecting life.

“I liked it a lot! Not gonna lie I was surprised how hockey in UK is. Before I came I didn’t know what I’m going into. Nobody that I played or met so far in my career had played in the UK before so it was hard to come to an unknown environment. But since day 1 everybody was so helpful with everything which I’m grateful for.  Especially the Raiders organisation when they do everything so professionally. It is hard to compare to the other leagues. Every country has its own style of hockey which in North America is more physical and Czech is more about skills and how smart you play. I’d say the UK is something in between. It has a little bit of each thing I said”.

We moved on to the UK’s expectations of the non-GB trained players in terms of ice time and points production:-

“Everywhere I played so far, as an import, the expectations are high and you have to give the best performance every practice and game. I like to play under pressure because then you can really play your best game. I hope the organization and fans are happy with how I performed so far and can’t wait to show them more this upcoming season”.

We groan at some of our longer away trips in this country and we were keen to find out of Lukas’s experiences in the North American and Canadian leagues in terms of travel.

“It’s a little different because in the UK we’re travelling back to back days sometimes and although they are shorter distances, it’s a lot of traveling for one weekend. In Canada and the US they are much longer distances but the days travelling are much more spread out. The longest bus trip i’ve had in Canada was 18 hours. Thankfully we had lay down beds”.

Lukas was luckier than Erik in that he managed to get a flight home before Covid 19 affected travel too badly.

“Yes i believe we caught one of the last flights before the borders closed. My girlfriend was just visiting me in the UK and helped me a lot with everything in such a rush. We got home before Czech closed their borders just two days after.

“I had to quarantine for 14 days when i got back home. Stayed at my mom’s house and thankfully she did everything for me and helped a lot.

“Czech has opened their borders, stores and restaurants now. Everything is slowly getting back to normal. Czech handled the situation very well and did a great job. People must still wear their masks in some places though.

“ When the rinks re-opened I began skating again. I’ve been skating twice a week with my friends. It’s very competitive and it’s great to get back on the ice with my ex-teammates”.

Lukas’s goal scoring celebrations were amongst last season’s photo highlights and he is clearly very passionate about the highs and lows of his game:-

“I’m a very competitive person and a sore loser. I have high expectations for myself every year and sometimes it’s frustrating not to get the results I want or I wish for. During the season Sean and I had couple conversations about turning my negativity into positivity and focus on myself and play my best game (hahaha). And yes as you can see I like to celebrate a lot with my line mates and teammates. I like to show my passion for the game and that overtime goal I scored at the Sapphire against Bracknell was probably one of my highlights for the season.

“Last thing I want to say is  want to thank the Raiders organisation for the last season. Endless support at home and away games from the Gold and Blue army. You guys made us feel like home at each away game and made amazing atmosphere everywhere we go. Stay safe and healthy everyone.  See you soon”.

So welcome back to Lukas, a returnee we bet no-one had predicted 🙂 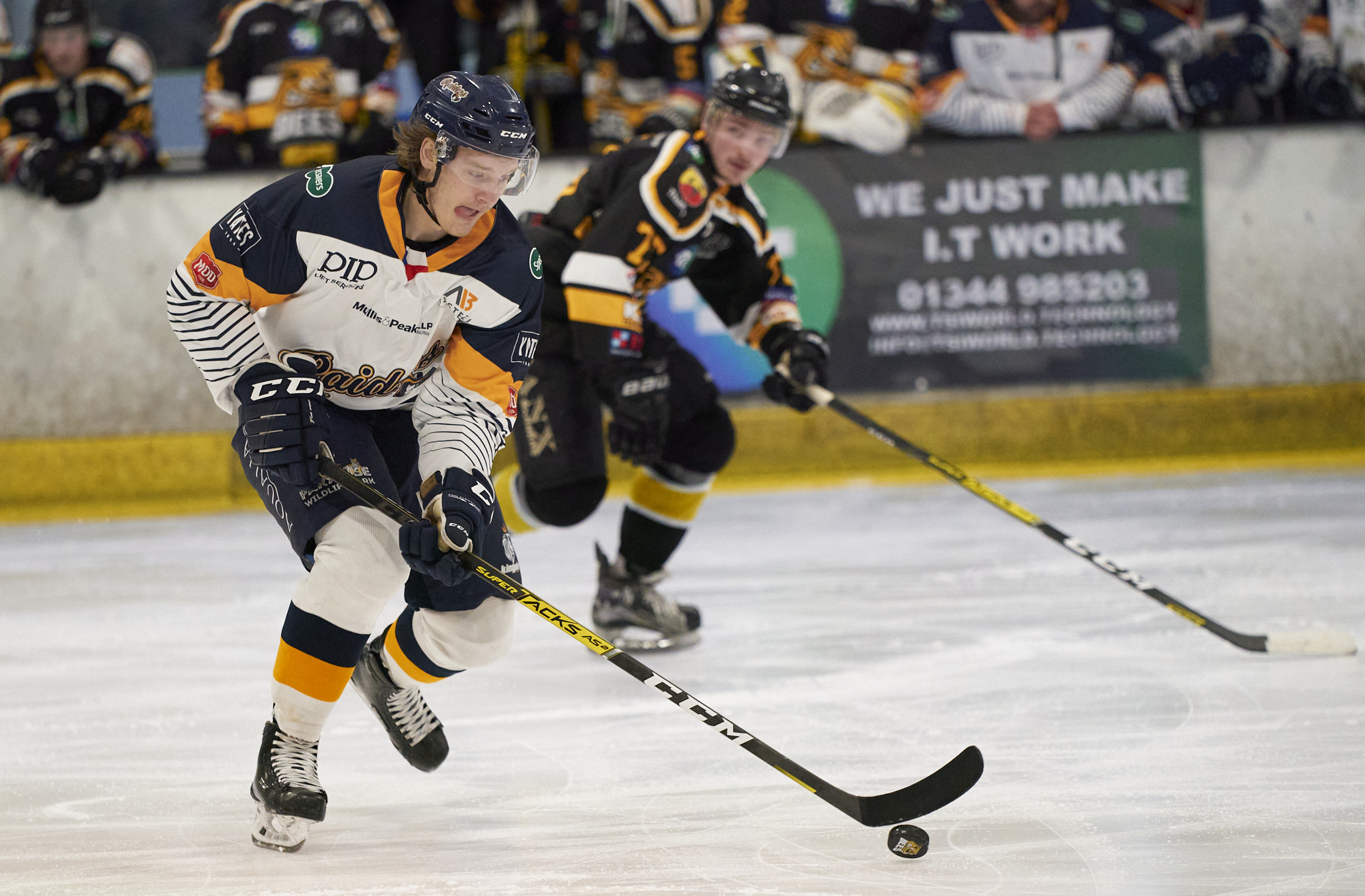 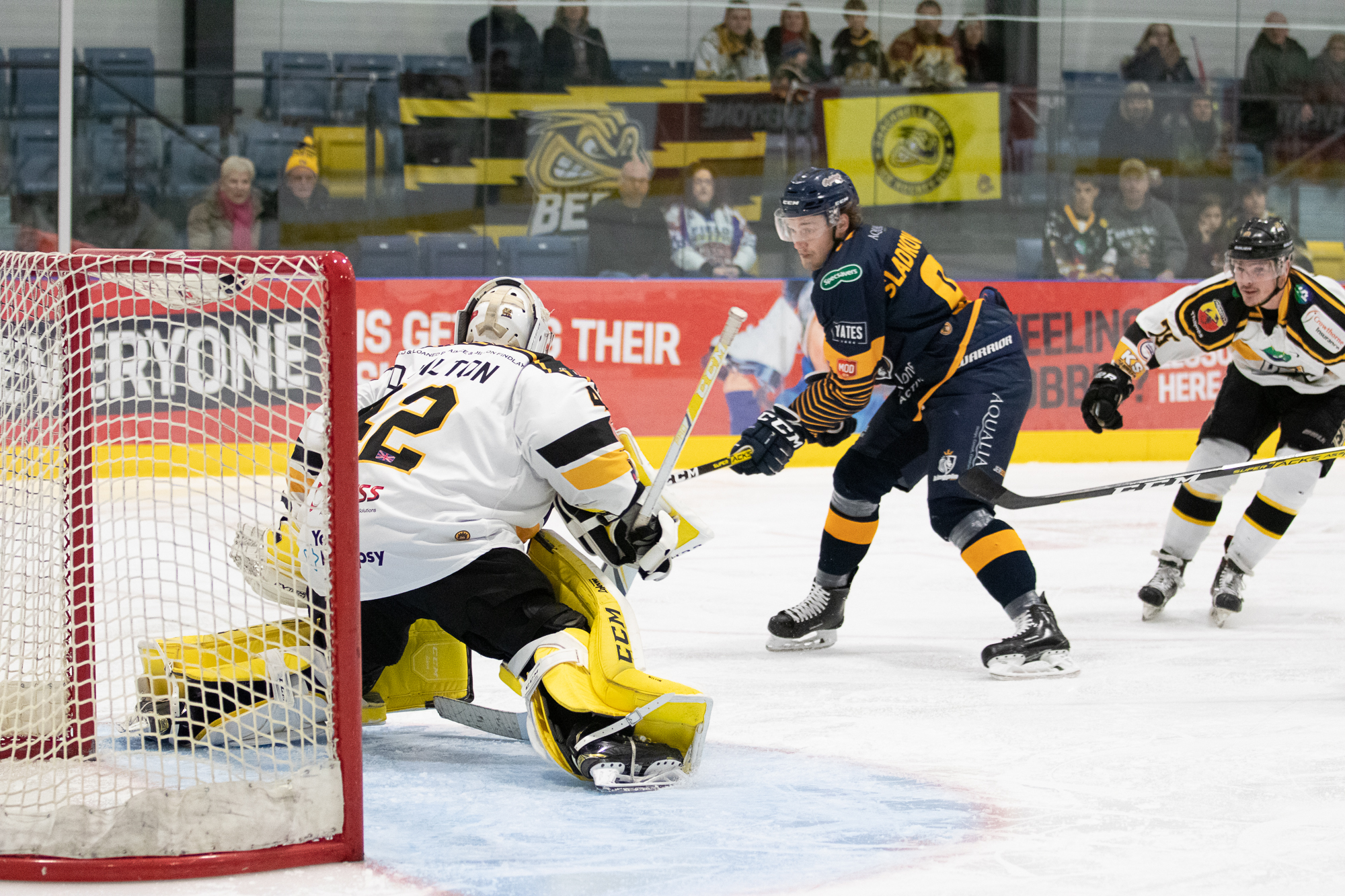 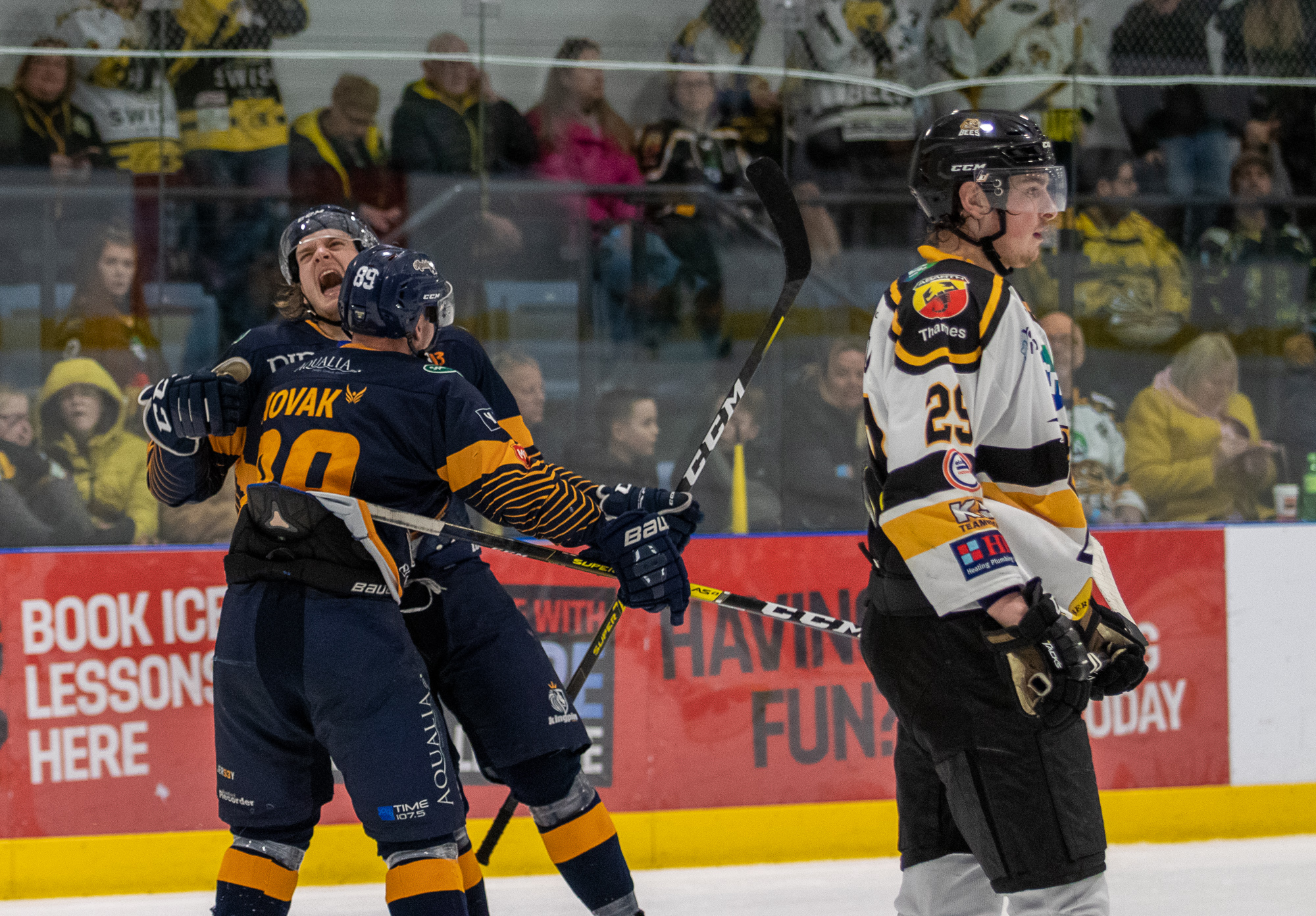 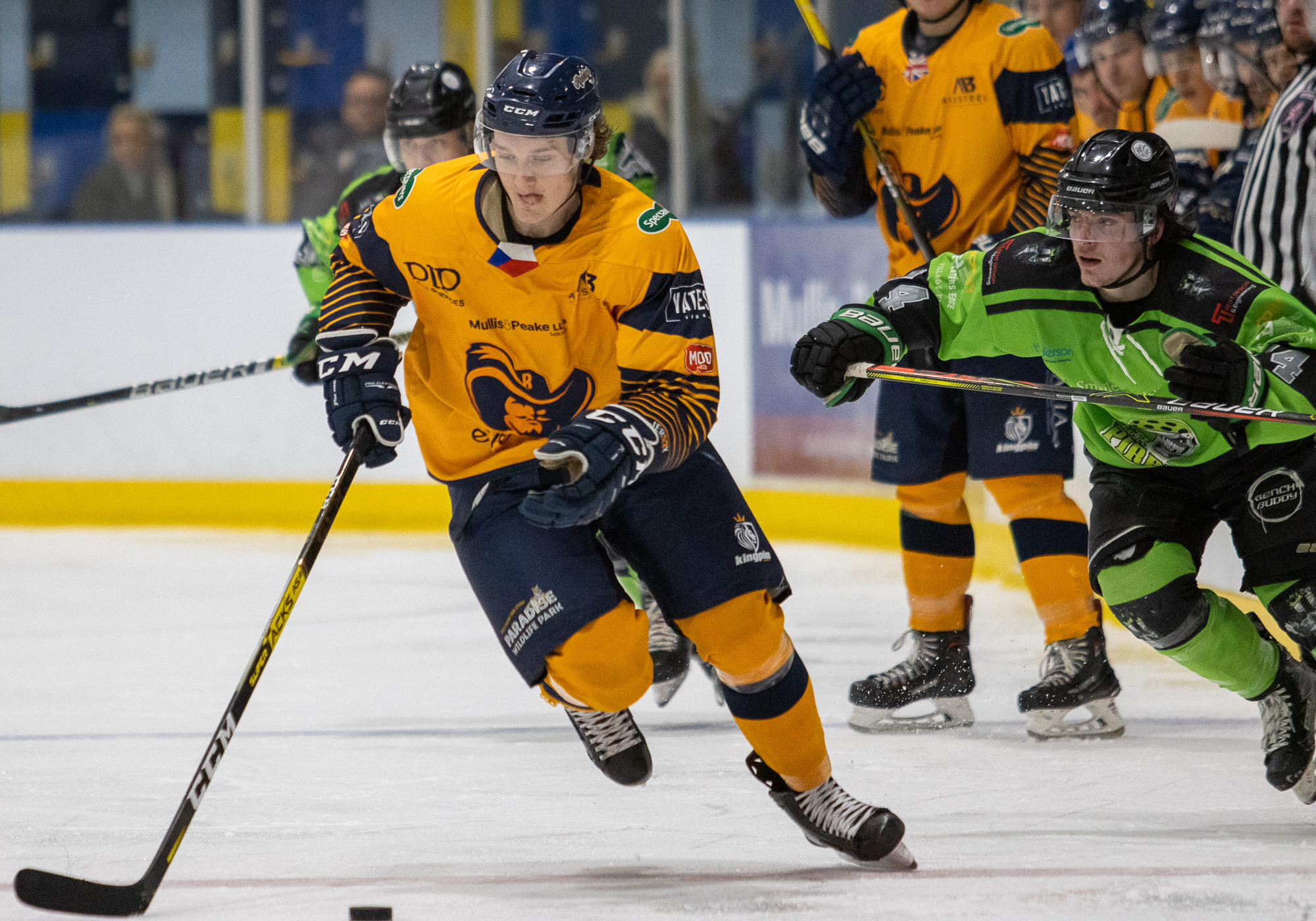 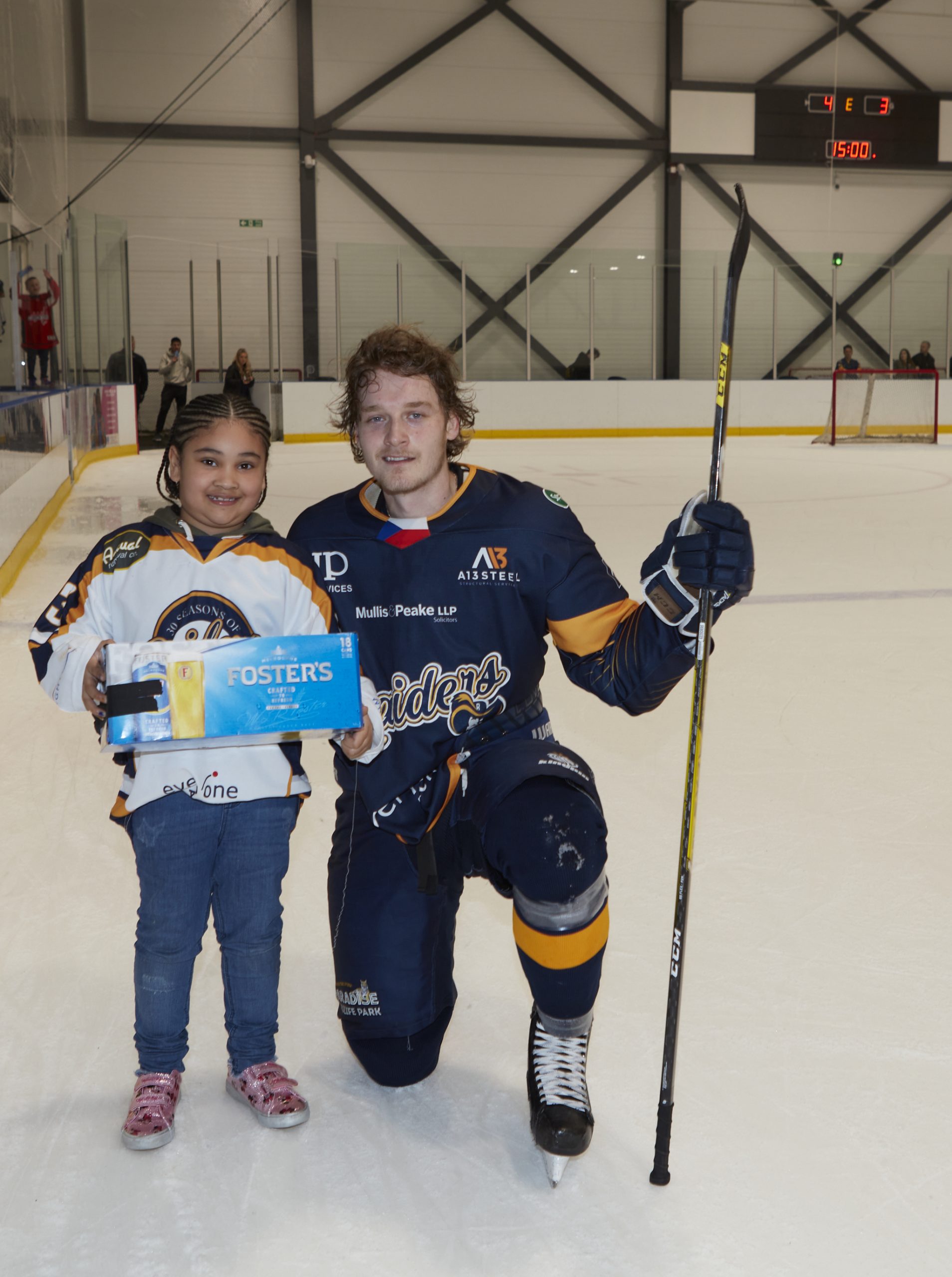